Immunohistochemistry: The OX-8 antibody is recommended to test for immunohistochemical staining of acetone-fixed frozen sections and paraffin sections. For paraffin sections no pretreatment is required. Tissues tested were rat spleen and thymus. The antibody stains the CD8 subset of T lymphocytes. The isotype control recommended for use with this antibody is purified mouse IgG1 (Cat. No. 550878). For optimal indirect immunohistochemical staining, the OX-8 antibody should be titrated (1:10 to 1:50 dilution) and visualized via a three-step staining procedure in combination with biotinylated polyclonal anti-mouse Ig (multiple adsorbed) (Cat. No. 550337) as the secondary antibody and Streptavidin-HRP (Cat. No. 550946) together with the DAB detection system (Cat. No. 550880). More conveniently, the anti-mouse Ig HRP detection kit (Cat. No. 551011) that contains the biotinylated secondary antibody, antibody diluent, streptavidin-HRP and DAB substrate can be used for staining. For more protocol information please visit http://www.bdbiosciences.com/resources/cellbiology/index.jsp 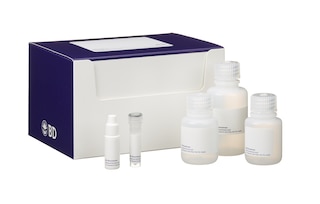 The OX-8 monoclonal antibody specifically binds to the hinge-like membrane-proximal domain of the 32 kDa α chain of the CD8 differentiation antigen. A truncated CD8 α' isoform has not been detected in the rat. The CD8 α and β chains (CD8a and CD8b, respectively) form a heterodimer on the surface of most thymocytes and a subpopulation of mature T lymphocytes (i.e., MHC class I-restricted T cells, including most T suppressor/cytotoxic cells). Intestinal intrapithelial lymphocytes, many CD8+ T cells of athymic rats, many activated CD4+ T cells, and most NK cells express CD8a without CD8b. It has been suggested that the expression of the CD8a/CD8b heterodimer is restricted to thymus-derived T lymphocytes. OX-8 antibody does not react with resting CD4+ T helper cells. CD8 is an antigen coreceptor on the T-cell surface which interacts with MHC class I molecules on antigen-presenting cells. It participates in T-cell activation through its association with the T-cell receptor complex and protein tyrosine kinase Ick. Macrophages have also been reported to express CD8 α and β chains, which are involved in signal transduction. Soluble OX-8 mAb partially blocks in vitro MLR and CTL activity.

Purified
Tissue culture supernatant is purified by either protein A/G or affinity purification methods. Both methods yield antibody in solution that is free of most other soluble proteins, lipids, etc. This format provides pure antibody that is suitable for a number of downstream applications including: secondary labeling for flow cytometry or microscopy, ELISA, Western blot, etc.
Purified
550298 Rev.2
Citations & References