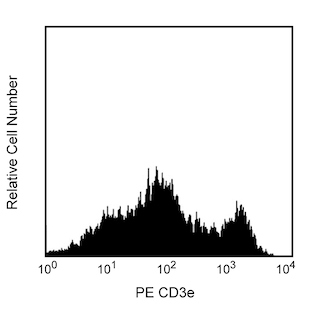 The LG.3A10 monoclonal antibody specifically binds to CD27, a lymphocyte-restricted member of the Tumor Necrosis Factor Receptor family which binds to CD70. The CD27 molecule is a 45-kDa transmembrane glycoprotein which is constitutively expressed by lymphocytes of the T lineage: virtually all thymocytes and over 90% of peripheral T cells bearing both αβ and γδ T-cell receptors. CD27 cooperates with the pre-TCR in mediating thymocyte differentiation and expansion. In addition, one to ten percent of mature peripheral B cells express CD27, and CD27's role in the differentiation of human plasma cells has been studied. Mouse NK cells, freshly isolated and IL-2-activated, also express CD27. In the bone marrow, CD27 is found on a progenitor population which provides short-term hematopoietic reconstitution. Cells of the myeloid lineage do not express CD27. Cross-linked LG.3A10 mAb has been reported to amplify the proliferative response of purified T lymphocytes to suboptimal mitogenic stimulation1 and to enhance NK-cell proliferation and IFN-γ production. In contrast, non-cross-linked LG.3A10 mAb inhibits CD3-induced pre-T cell development by interfering with the receptor-ligand interaction. This hamster mAb to a mouse leukocyte antigen has been observed to cross-react with a similar population of rat leukocytes.

Biotin
Biotin is a ubiquitous co-factor (also known as Vitamin B7) that has many properties that make it extremely useful for molecular biology. Biotin has an extremely high affinity for the Avidin family of proteins (Kd = 10-15 M), making it the perfect tool to link two molecules. Biotin labeled antibodies can be combined with any number of Avidin-conjugated probes in order to customize an assay to a particular need. This is especially useful in the case of magnetic cell separation using streptavidin/magnetic bead conjugates, or in the case of flow cytometry using streptavidin/fluorophore conjugates.
Biotin
558753 Rev.8
Citations & References