BD® CompBeads can be used as surrogates to assess fluorescence spillover (Compensation).  When fluorochrome conjugated antibodies are bound to CompBeads, they have spectral properties very similar to cells.   However, for some fluorochromes there can be small differences in spectral emissions compared to cells, resulting in spillover values that differ when compared to biological controls.  It is strongly recommended that when using a reagent for the first time, users compare the spillover on cells and CompBead to ensure that BD® CompBeads are appropriate for your specific cellular application. 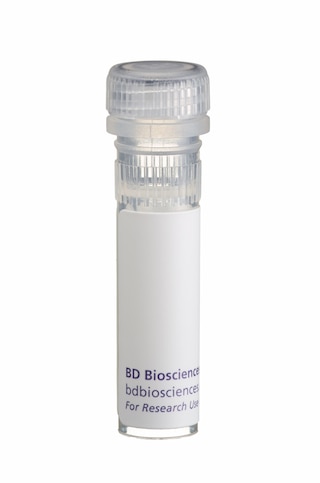 The antibody was conjugated to BD Horizon™ BB515 which is part of the BD Horizon Brilliant™ Blue family of dyes. With an Ex Max near 490 nm and an Em Max near 515 nm, BD Horizon BB515 can be excited by the blue laser (488 nm) laser and detected with a 530/30 nm filter. This dye has been exclusively developed by BD Biosciences and is up to seven times brighter than FITC with less spillover into the PE channel. Due to similar excitation and emission properties, BB515, FITC, and Alexa FluorTM 488 cannot be used simultaneously. It is not recommended to use BB515 in cocktails that include Streptavidin conjugates as it may cause high background.

BB515
The BD Horizon Brilliant™ Blue 515 (BB515) dye is part of the BD Horizon Brilliant™ Blue family of dyes. This dye is a polymer fluorochrome with an excitation maximum (Ex Max) at 490-nm and an emission maximum (Em Max) of 515-nm. Driven by BD innovation, BB515 is designed to be excited by the blue laser (488-nm) and detected using an optical filter centered near 520-nm (e.g., 530/30-nm). BB515 reagents are significantly brighter than equivalent FITC or Alexa Fluor™ 488 reagents with less spillover into the PE detector. Please ensure that your instrument’s configurations (lasers and optical filters) are appropriate for this dye.
BB515
Blue 488 nm
490 nm
515 nm
567746 Rev.1
Citations & References