Investigators should note that alternative staining procedures may be necessary.  A multiple-step staining procedure is strongly recommended, in some instances, to amplify immunofluorescent signals for the flow cytometric analysis of mouse CXCR5 expression.  Investigators may find the Purified Rat Anti-Mouse CXCR5 antibody (Cat. No. 551961) to be useful in conjunction with appropriate secondary and tertiary reagents for detecting low frequency expression, such as with Biotin Mouse Anti-Rat IgG2a (Cat. No. 553894) and PE Streptavidin (Cat. No. 554061) or FITC Streptavidin (Cat. No. 554060). 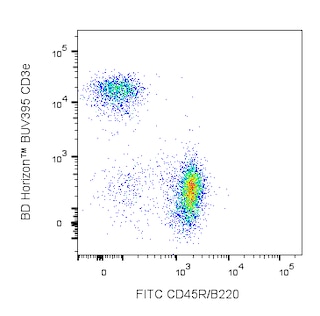 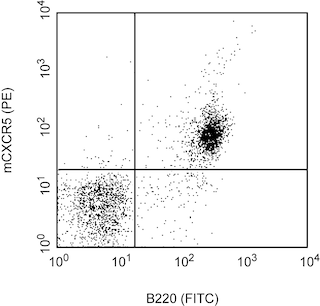 The 2G8 monoclonal antibody specifically binds to the mouse C-X-C Chemokine Receptor type 5, CXCR5. CXCR5 is also known as CD185, BLR1, NLR and MDR15. CXCR5 is a seven-transmembrane, G-protein-coupled receptor that is specific for the CXC chemokine, CXCL13/BLC/BCA-1. The expression of CXCR5 has been detected in spleen, lymph nodes, tonsils, brain, bone marrow, T cells, B cells, cerebrum, cerebellum, hippcampus and pituitary. In mouse spleen, CXCR5 was strictly expressed by mature B cells and a small subset of T lymphocytes. CXCR5 plays a role in directing the migration of B and T cells to B cell follicles with the spleen and certain other lymphoid tissues. The immunogen used to generate 2G8 hybridoma was a recombinant protein containing N-terminal amino acids of mouse CXCR5 (GST-NmBLR1).

APC
Allophycocyanin (APC), is part of the BD family of phycobiliprotein dyes. This fluorochrome is a multimeric fluorescent phycobiliprotein with excitation maximum (Ex Max) of 651 nm and an emission maximum (Em Max) at 660 nm. APC is designed to be excited by the Red (627-640 nm) laser and detected using an optical filter centered near 660 nm (e.g., a 660/20 nm bandpass filter). Please ensure that your instrument’s configurations (lasers and optical filters) are appropriate for this dye.
APC
Red 627-640 nm
651 nm
660 nm
560615 Rev.2
Citations & References