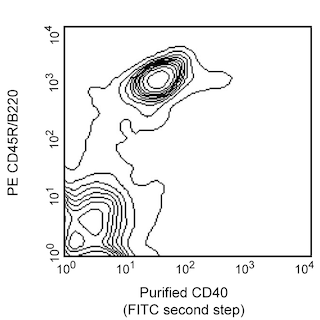 The RM134L antibody reacts with CD252 (OX-40 Ligand, OX-40L), a member of the NGF/TNF superfamily which is present on antigen-presenting cells and activated B lymphocytes. OX-40L interacts with OX-40 Antigen (CD134) found predominantly on activated T cells. This ligand-receptor pair is grouped with pairs such as CD40-CD40L and CD80- or CD86-CD28, which contribute significantly to B-cell/T-cell interaction during the immune response. The OX-40L-OX-40 interaction is reciprocally costimulatory in that both T cells and B cells are activated in cross-linking. Stimulation via OX-40 Antigen increases the proliferative and IL-2 production responses of activated T cells, while stimulation via OX-40L enhances proliferation and Ig secretion by activated B cells. The RM134L mAb stains B cells activated for four days with anti-IgM plus anti-CD40 (Clone HM40-3) antibodies. An increased binding of OX-40-Ig fusion protein to mouse splenic B cells was observed when B cells were treated with lipopolysaccharide (LPS), suggesting that OX-40L expression is augmented in LPS-activated splenic B cells when compared to resting cells, but this observation could not be confirmed with the RM134L mAb. In addition, other studies with OX-40-Ig fusion protein detected OX-40L on CD4+ and CD8+ activated splenic T cells, but OX-40L was not detected on T cells with the RM134L mAb. Similar results have been reported by others. The RM134L mAb inhibits the binding of OX-40-Ig fusion protein to OX-40L transfectants and blocks the costimulatory activity of OX-40L.