Store undiluted at 4°C and protected from prolonged exposure to light. Do not freeze. The monoclonal antibody was purified from tissue culture supernatant or ascites by affinity chromatography. The antibody was conjugated to Alexa Fluor® 488 under optimum conditions, and unreacted Alexa Fluor® 488 was removed.
Show More 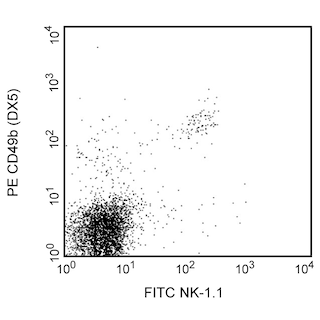 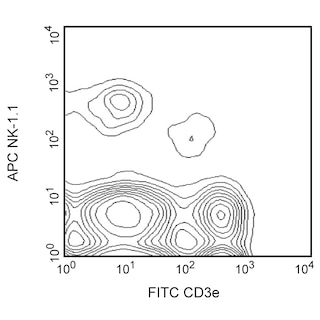 The ME-9F1 monoclonal antibody specifically binds to mouse CD146. The CD146 adhesion molecule is a type 1 transmembrane glycoprotein and member of the immunoglobulin superfamily. CD146 is expressed by blood vessel endothelial cells and may play roles in forming intercellular junctions between endothelial cells and influencing the transendothelial migration of other cell types. CD146 is also expressed by some melanoma cell lines, NK cells and neutrophils. CD146 is not detectable on mouse monocytes, dendritic cells, T cells, NKT cells, B cells and smooth muscle cells. Increased expression of CD146 is reportedly associated with NK cell maturation and may be used to characterize different functional NK cell subsets. Activated CD146-positive mouse NK cells reportedly are less cytotoxic and secrete less IFN-γ than their CD146-negative counterparts.