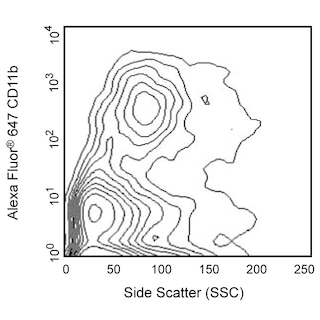 The AFS98 monoclonal antibody specifically recognizes CD115 which is also known as Colony stimulating factor 1 Receptor (CSF-1R), Macrophage colony-stimulating factor 1 receptor (M-CSFR), or c-fms. This type I transmembrane glycoprotein is a receptor tyrosine kinase (RTK) that is encoded by Csf1r which belongs to the Ig superfamily. CD115 (CSF-1R) is comprised of an extracellular ligand-binding domain that is followed by a single transmembrane segment and a split intracellular tyrosine kinase domain. This receptor is expressed on monocytes, macrophages, dendritic cells, osteoclasts, and their precursors. Colony-stimulating factor 1 (CSF-1), also known as Macrophage colony-stimulating factor (M-CSF), binds to and signals through CD115 (CSF-1R) homodimers which undergo tyrosine autophosphorylation. The activated receptors transduce intracellular signals resulting in cytoskeletal reorganization and gene expression involved in the proliferation, differentiation, and survival of CSF-1-responding cells. Through CD115 (CSF-1R), CSF-1 regulates the release of proinflammatory cytokines and other mediators from macrophages and plays a role in the bone resorption activity of osteoclasts. Interleukin-34 (IL-34) is another ligand for CD115 (CSF-1R) that can induce similar, as well as, some different biological responses by target cells that express this receptor.

PE
R-Phycoerythrin (PE), is part of the BD family of Phycobiliprotein dyes. This fluorochrome is a multimeric fluorescent phycobiliprotein with excitation maximum (Ex Max) of 496 nm and 566 nm and an emission maximum (Em Max) at 576 nm. PE is designed to be excited by the Blue (488 nm), Green (532 nm) and Yellow-Green (561 nm) lasers and detected using an optical filter centered near 575 nm (e.g., a 575/26-nm bandpass filter). As PE is excited by multiple lasers, this can result in cross-laser excitation and fluorescence spillover on instruments with various combinations of Blue, Green, and Yellow-Green lasers. Please ensure that your instrument’s configurations (lasers and optical filters) are appropriate for this dye.
PE
Yellow-Green 488 nm, 532 nm, 561 nm
496 nm, 566 nm
576 nm
566839 Rev.1
Citations & References