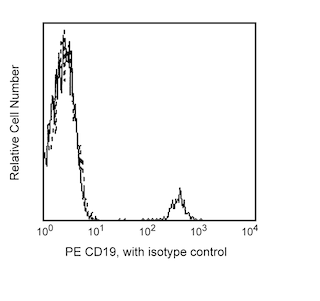 The A1/CD307d monoclonal antibody specifically recognizes CD307d which is also known as Fc receptor-like protein 4 (FCRL4), Fc receptor homolog 4 (FCRH4), or Immune receptor translocation-associated protein 1 (IRTA1). CD307d (FCRL4) is a type I transmembrane glycoprotein that belongs to the IRTA gene family within the Ig gene superfamily. It has four extracellular Ig-like domains, a helical transmembrane region, and two consensus immunoreceptor tyrosine-based inhibition motifs (ITIMs) and one immunoreceptor tyrosine-based switch motif (ITSM) in its cytoplasmic domain. CD307d (FCRL4) binds to aggregated IgA and IgG, and its highest level of expression is on memory B cells in mucosa-associated lymphoid tissues (MALT). Chromosomal abnormalities in the region of the FCRL4 gene are associated with non-Hodgkin lymphoma and multiple myeloma, and CD307d (FCRL4) may play a role in HIV-induced memory B cell dysfunction.