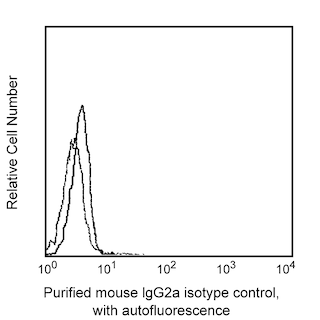 This antibody is routinely tested by flow cytrometric analysis.  Other applications were tested at BD Bioscience Pharmingen during antibody development only or reported in the literature.

Purified
Tissue culture supernatant is purified by either protein A/G or affinity purification methods. Both methods yield antibody in solution that is free of most other soluble proteins, lipids, etc. This format provides pure antibody that is suitable for a number of downstream applications including: secondary labeling for flow cytometry or microscopy, ELISA, Western blot, etc.
Purified
551296 Rev.1
Citations & References