This SKU will be discontinuing Jul 2022 or until supply ends. Suggested alternate SKU is [558165] or for additional support, contact your local applications specialist. Contact us 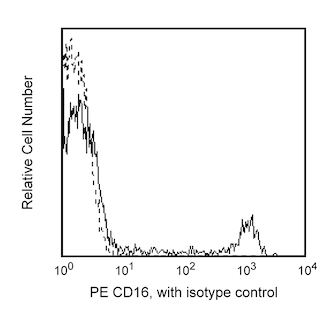 The 5E8 monoclonal antibody specifically binds to human CCR3 which is also known as CD193. CCR3 is a G protein-linked, 7 transmembrane, chemokine receptor expressed on a variety of hematopoietic cells. Similar to CCR5 and CXCR4, CCR3 can be a co-receptor for HIV-1. It is primarily expressed by eosinophils and basophils during atopic conditions, dermatitis, allergic rhinitis, conjunctivitis and bronchial asthma. Chemokines including RANTES, Eotaxin, MCP-3, MIP1α have been reported to act as ligands for CCR3 and stimulate CCR3+ cells. Eotaxin stimulates Th2 cells expressing CCR3. Other studies describe HIV-1 specific T cell cytotoxicity can be mediated by RANTES and Eotaxin through CCR3. CCR3 expressed on dendritic cells may have a biological role on cell-cell interaction during antigen presentation. CCR3 has been clustered as CD193 in the HLDA VIIIth workshop.