The CD28.2 monoclonal antibody is reportedly useful for multiple applications including the co-stimulated increase in cytokine production and proliferative responses by Anti-CD3 antibody-stimulated T cells. 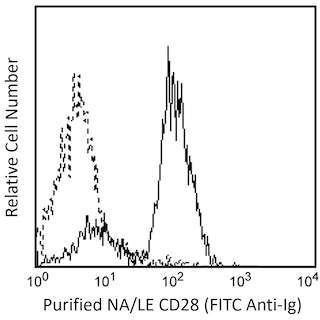 The CD28.2 monoclonal antibody specifically binds to CD28, a 44 kDa homodimeric transmembrane glycoprotein present on most mature T cells, thymocytes and plasma cells. CD28 is a costimulatory receptor that binds CD80 and CD86 as ligands and plays a very important role in T cell-B cell interactions. It has been suggested that CD28 initiates and regulates a separate and distinct signal transduction pathway from those stimulated by the TCR complex. Additionally, it has been reported that CD28 antibody clones vary in their ability to stimulate T cells to produce IL-2 and increase intracellular Ca2+ concentration. This finding suggests the existence of functionally distinct subregions on the CD28 molecule. CD28.2 has been demonstrated to bind to the same molecule as clone L293, another CD28 mAb, and has been reported to induce Ca2+ influx in Jurkat T cells.

NA/LE
NA/LE refers to the culture and purification methods and buffer used to produce purified antibodies with no azide and low endotoxin: Aqueous buffered solution containing no preservative, 0.2µm sterile filtered. Endotoxin level is ≤0.01 EU/µg (≤0.001 ng/µg) of protein as determined by the LAL assay.NA/LE are perfectly suited to be used in culture or in vivo (for nonhuman studies) for functional assays — blocking, neutralizing, activation or depletion — where the presence of azide may damage cells or exogenous endotoxin may signal or activate cells.
NA/LE
567116 Rev.1
Citations & References