Immunohistochemical staining of endothelial cells. The zinc-fixed paraffin-embedded section of U-87 MG tumor in mouse brain was stained with MEC13.3 mAb. Note the brown labeling of endothelia of blood vessels in the tumor.

Immunocytochemistry: The MEC13.3 antibody is recommended to test for immunohistochemical staining of Zinc-fixed paraffin sections. Tissues tested were mouse spleen, lung, heart, and thymus. Immunohistochemistry of acetone-fixed frozen sections has been reported. The antibody stains endothelial cells on small and large blood vessels. The isotype control recommended for use with this antibody is purified rat IgG2a (Cat. No. 559073). For optimal indirect immunohistochemical staining, the MEC13.3 antibody should be titrated (1:10 to 1:50 dilution) and visualized via a three-step staining procedure in combination of biotinylated polyclonal anti-rat Igs (multiple adsorption) (Cat. No. 559286) as the secondary antibody and Streptavidin-HRP (Cat. No. 550946) together with the DAB Substrate Kit (Cat. No. 550880). Alternatively, the anti-rat Ig HRP Detection Kit (Cat. No. 551013) can be used to accomplish the three-step staining procedure. The clone MEC13.3 is not recommended for formalin-fixed paraffin embedded sections 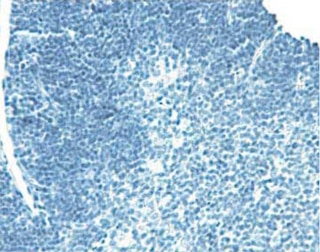 The MEC13.3 antibody specifically recognizes CD31, also known as PECAM-1 (Platelet Endothelial Cell Adhesion Molecule-1). CD31 is a 130 kDa integral membrane protein, a member of the immunoglobulin superfamily, that mediates cell-to-cell adhesion. CD31 is expressed constitutively on the surface of adult and embryonic endothelial cells and is also expressed on many peripheral leukocytes and platelets. It has also been detected on bone marrow-derived hematopoietic stem cells and embryonic stem cells. CD31 is involved in the transendothelial emigration of neutrophils, and neutrophil PECAM-1 appears to be down-regulated after extravasation into inflamed tissues. Multiple alternatively spliced isoforms are detected during early post-implantation embryonic development; this alternative splicing is involved in the regulation of ligand specificity. CD38 and vitronectin receptor (αvβ3 integrin, CD51/CD61) are proposed to be ligands for CD31. CD31-mediated endothelial cell-cell interactions are involved in angiogenesis. The MEC13.3 mAb inhibits a variety of in vitro and in vivo functions mediated by CD31.

Purified
Tissue culture supernatant is purified by either protein A/G or affinity purification methods. Both methods yield antibody in solution that is free of most other soluble proteins, lipids, etc. This format provides pure antibody that is suitable for a number of downstream applications including: secondary labeling for flow cytometry or microscopy, ELISA, Western blot, etc.
Purified
550274 Rev.2
Citations & References