Store undiluted at 4°C. This preparation contains no preservatives, thus it should be handled under aseptic conditions. The monoclonal antibody was purified from tissue culture supernatant or ascites by affinity chromatography.
Show More 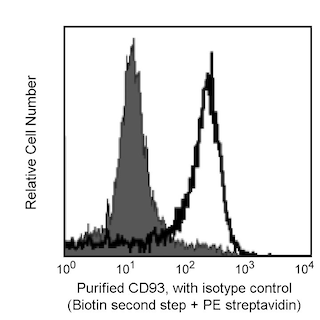 The R139 monoclonal antibody specifically binds to CD93 which is also known as Complement component C1q receptor (C1qR), C1q receptor 1 (C1qR1), or Matrix-remodeling-associated protein 4 (MXRA4). The immunogen used to generate the R139 hybridoma was a preparation of CD93 protein. Human CD93 is a transmembrane glycoprotein that is highly expressed on monocytes, macrophages, granulocytes, and endothelial cells but not on T and B lymphocytes. CD93 is also known as the C1q/MBL/SPA Receptor as it binds C1q, the recognition subunit of the first component (C1) of the complement pathway, as well as MBL (Mannose-binding-lectin) and SPA (Pulmonary Surfactant Protein A). Human C1qRp is involved in the C1q-mediated enhancement of phagocytosis. R139 is suitable to detect CD93 expression on cells of myeloid lineage by flow cytometry, and CD93 in cellular lysates by Western blotting or immunoprecipitation. In addition, R139 reportedly neutralizes C1q-mediated enhancement of phagocytosis. CD93 has also been reported to define a human stem cell population with hematopoietic and hepatic potential.

NA/LE
NA/LE refers to the culture and purification methods and buffer used to produce purified antibodies with no azide and low endotoxin: Aqueous buffered solution containing no preservative, 0.2µm sterile filtered. Endotoxin level is ≤0.01 EU/µg (≤0.001 ng/µg) of protein as determined by the LAL assay.NA/LE are perfectly suited to be used in culture or in vivo (for nonhuman studies) for functional assays — blocking, neutralizing, activation or depletion — where the presence of azide may damage cells or exogenous endotoxin may signal or activate cells.
NA/LE
552954 Rev.3
Citations & References