The monoclonal antibody was purified from tissue culture supernatant or ascites by affinity chromatography. Store undiluted at -20°C.
Show More 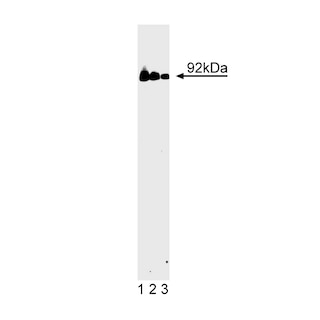 Stat (Signal transducer and activators of transcription) proteins are critical mediators of the biologic activity of cytokines, including interleukins, interferons, erythropoietin, and growth factors.  Ligand-receptor interaction leads to activation of constitutively associated JAK family kinases and subsequent recruitment/activation of Stat proteins by tyrosine phosphorylation.  Active Stat proteins then move to the nucleus to promote transcription of cytokine-inducible genes.  Seven Stat proteins have been cloned, each of which is differentially expressed and/or activated in a cytokine-specific and cell type-specific manner. Stat3 is a 92-kDa protein that is activated as a DNA- binding protein through cytokines, such as IL-6, and growth factors, such as EGF. Stat3 activation occurs via tyrosine phosphorylation at Y705. Tyrosine phosphorylation in response to cytokine stimulation is generally mediated by JAK1. Upon activation, Stat3 dimerizes, translocates to the nucleus and binds DNA response elements, thereby regulating gene expression. It has been reported that Stat3 binds to DNA as a homodimer, but it is also capable of binding as a heterodimer with Stat1. In addition to tyrosine phosphorylation, Stat3 is also phosphorylated at S727 via the MAPK pathway.  Stat3 is widely expressed and can bind to the sis-inducible element (SIE) site from the c-fos promoter. This site is similar to the GAS element that is present in IFN-γ induced genes. Thus, phosphorylation of Y705 in Stat3 occurs in response to growth factors and cytokines, and is essential for normal transcription activity.

The 4/P-STAT3 monoclonal antibody recognizes the phosphorylated Y705 of Stat3.

Purified
Tissue culture supernatant is purified by either protein A/G or affinity purification methods. Both methods yield antibody in solution that is free of most other soluble proteins, lipids, etc. This format provides pure antibody that is suitable for a number of downstream applications including: secondary labeling for flow cytometry or microscopy, ELISA, Western blot, etc.
Purified
612357 Rev.1
Citations & References