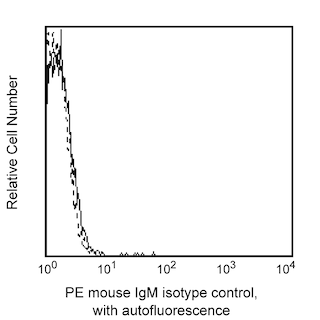 The CARL-2 monoclonal antibody specifically binds to TWEAK (TNF-related WEAK inducer of apoptosis), a type II transmembrane protein of approximately 1.4 kDa. TWEAK is also known as CD255. It is present as a cell surface bound or a secreted form, expressed on most tissues and non-lymphoid tumor cell lines, but weak or no expression on hematopoietic lineage lines. TWEAK is not detectable on resting PBMC, but its expression on peripheral blood monocytes is upregulated upon IFN-g stimulation. Reports indicate that TWEAK interacts with its receptor APO-3 and this interaction can lead to apoptosis, IL-8 secretion, NF-kB activation and endothelial cell proliferation. Clone CARL-1, a different monoclonal antibody, also reacts with CD255 (TWEAK) but to a different epitope.

PE
R-Phycoerythrin (PE), is part of the BD family of Phycobiliprotein dyes. This fluorochrome is a multimeric fluorescent phycobiliprotein with excitation maximum (Ex Max) of 496 nm and 566 nm and an emission maximum (Em Max) at 576 nm. PE is designed to be excited by the Blue (488 nm), Green (532 nm) and Yellow-Green (561 nm) lasers and detected using an optical filter centered near 575 nm (e.g., a 575/26-nm bandpass filter). As PE is excited by multiple lasers, this can result in cross-laser excitation and fluorescence spillover on instruments with various combinations of Blue, Green, and Yellow-Green lasers. Please ensure that your instrument’s configurations (lasers and optical filters) are appropriate for this dye.
PE
Yellow-Green 488 nm, 532 nm, 561 nm
496 nm, 566 nm
576 nm
552890 Rev.3
Citations & References