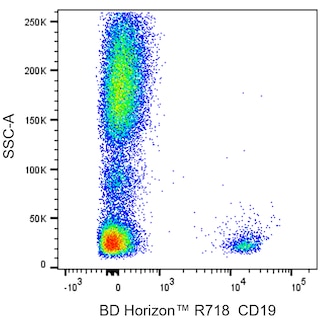 The SJ25C1 monoclonal antibody specifically binds to CD19, a B lymphocyte-lineage differentiation antigen. CD19, a 90-kDa transmembrance glycoprotein, is a member of the immunoglobulin superfamily and is expressed throughout B-lymphocyte development from the pro-B cell through the mature B-cell stages. Terminally differentiated plasma cells do not express CD19. On the surface of mature B cells, the CD19 molecule associates with CD21 (CR-2) and CD81 (TAPA-1), and this multimolecular complex synergizes with surface immunoglobulin to promote cellular activation. Studies with CD19-deficient mice have suggested that the level of CD19 expression affects the generation and maturation of B cells in the bone marrow and periphery. B-1 lineage B cells, also known as CD5+ B cells, are drastically reduced or absent in CD19-deficient mice. Increased levels of CD19 expression correlate with increased frequencies of peritonal and splenic B-1 cells and reduced numbers of conventional B lymphocytes in the periphery. CD19 participates in B-lymphocyte development, B-cell activation, maturation of memory B cells and regulation of tolerance. CD19 has also been detected on peritoneal mast cells, co-localized with CD21/CD35, and it is proposed to play a role in complement-mediated mast-cell activation.