Human multipotent mesenchymal stromal cells (MSCs), also referred to as mesenchymal stem cells, are a rare population of adult stem cells that can be isolated from a variety of tissues. MSCs that have been isolated from bone marrow and subsequently cultured can differentiate to a variety of cell types, most notably adipocytes, osteocytes and chondrocytes. MSCs also have immunomodulatory effects in vivo and in vitro. In 2006, the International Society for Cellular Therapy (ISCT) proposed a cell surface marker panel for the minimal identification of human MSCs derived from bone marrow. Under this recommendation MSCs should be positive for CD73, CD90, and CD105, but be negative for CD34, CD45, CD11b or CD14, CD19 or CD79α, and HLA-DR. MSCs are also known to express numerous cell surface markers such as CD44, CD29, CD200, CD166, CD146 and CD271.  This lineage set includes the set of ISCT negative markers as a cocktail and also a corresponding isotype control cocktail.

Store undiluted at 4°C and protected from prolonged exposure to light. Do not freeze. The antibody was conjugated with R-PE under optimum conditions, and unconjugated antibody and free PE were removed.
Show More 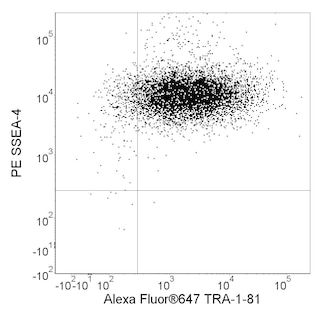 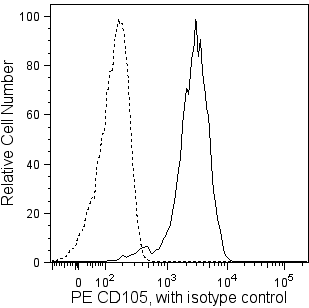